As a young student, Chelsea Miro often wondered why teachers forced her to memorize and regurgitate facts. “I couldn’t figure out why I was learning what I was learning,” says the 31-year-old former elementary school teacher and author of a new CAST book The Unbound Classroom, which focuses on creating innovative cross-disciplinary units using universally designed approaches.

Miro was an unlikely teacher. “I didn’t really enjoy school as a kid,” she says. “As a justice-minded, logical thinker, I often felt school was unfair and didn’t make sense. The idea of returning, of my own volition, to a classroom every day seemed wholly unappealing.”

Despite her early aversion to school, Miro decided to pursue an undergraduate degree in American civilization at Brown University.

“I went there, in part, because of the academic freedom it afforded,” she says. “It was a major completely devoid of disciplinary rules and regulations. My classes covered all kinds of issues, all in the context for America, but with few other bounds. We were able to have deep and fruitful discussions with thinkers from every discipline.”

Miro wasn’t sure what to do after college until she enrolled in a “life-changing” class called “The Craft of Teaching.”

Her life’s purpose seemed to click clearly into place. “I knew I wanted to do something that was valuable to others,” Miro says. “When I took this really phenomenal education class, it changed the way I thought about education.”

The class opened her eyes to the power of education as a tool for change: “It could explain the world to you as opposed to making you feel like you’re not capable of understanding the world until you understand X, Y and Z.”

Inspired to pursue a Master’s degree in elementary education at Brown University, Miro soon started playing around with the idea that learning should be structured around a particular idea or topic, rather than restricted to a single discipline.

Math, science, language, art, music — none of these subjects exist in the world in a vacuum, Miro says. So why separate them only to have students enter the real world and be expected to integrate them? “When I began unbinding my classroom, I found the level of enthusiasm and intrigue drove my student’s natural curiosity.”

“I started to see these moments when kids were invited to think about things going on in the world around them, things they knew about but no one was talking to them about,” she says. “They came alive — every single student! That’s the way I wanted to teach!”

The UDL Connection to the Unbound Classroom 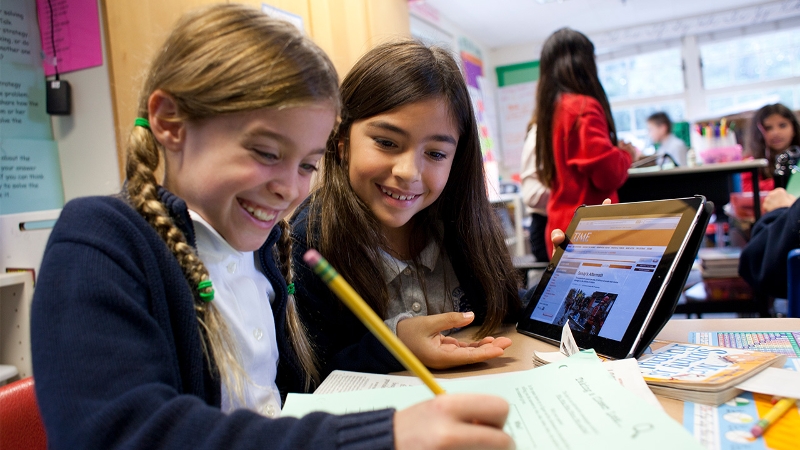 Students decipher the different parts of a news article for an Unbound Classroom unit on journalism.

After earning her Master’s degree, Miro moved to Santa Barbara, California, to teach third grade in a school with no established curriculum.

“They had ordered a math book, but it was basically all on me to create everything,” she says. “That’s a really daunting task, but I was able to be really creative.”

Miro soon realized that if she didn’t have a clear guide to help her think about varying learning styles, students could be left out.

That’s where the Universal Design for Learning (UDL) Guidelines were the perfect compliment to the Unbound Classroom, ensuring that every lesson fit every possible need. “By going through each piece of the guidelines, I could really take each lesson through a process,” Miro says. “Do I have enough auditory support? Do I have enough visual support? Are my lessons meeting the needs of every student so they can learn in the way that’s best for them?”

The Opposite of Unbound Learning: Regurgitating Math Facts 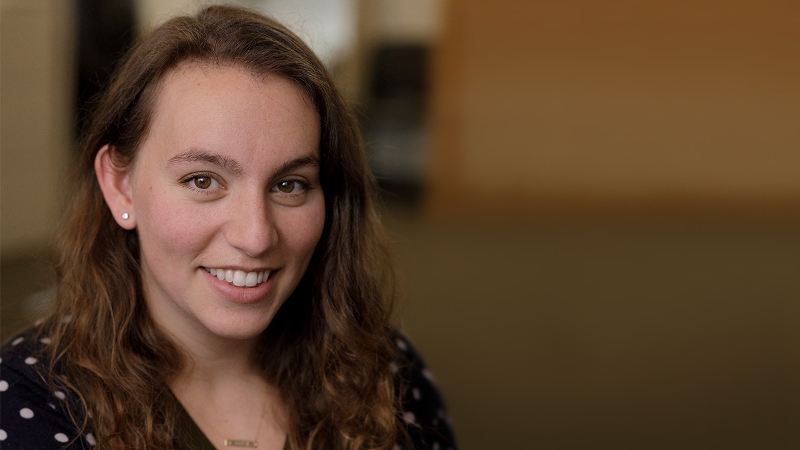 In her book, Miro describes how an elementary school teacher humiliated her as the last student able to recite 100 multiplication facts in five minutes or less.

Her teacher would make the class stay in for recess and watch her take the test, grading it in front of everyone. She’d say, ‘Well, it looks like you’ll all be in for recess again next week.’

“I can still hear the chorus of groans from my classmates,” Miro says. “I still feel very traumatized from it!”

Those feelings of inadequacy lingered until graduate school, when Miro began learning how to teach math to elementary students.

“My professor explained how different brains process numbers in different ways. She said children shouldn’t be forced to memorize, as that is not really math. Math is the logical pursuit of patterns guided by critical reasoning,” Miro says. “I hadn’t seen a definition like that printed anywhere on the myriad of flashcards I’d drilled.”

Teaching in today’s digital world where students use technological devices daily brings its own challenges to teachers and parents.

“I really think that for kids now, parents and adults are irrelevant if the only thing they’re doing is sharing facts and saying what they can and can’t do,” Miro says. “Kids can ask Alexa, and Alexa can tell them any fact they need or want to know.

“It’s the job of parents to open up the world to their children, to help them generate better questions, richer questions, bigger questions,” she says.

“If kids want to know how far it is to the moon, Alexa can tell them that. But Alexa can’t tell them what it means to the people on Earth to have astronauts exploring the moon. Alexa can’t sit with them and start imagining what it would be like to live on another planet. Those kinds of conversations can be so fruitful and so fascinating.”

Using the internet can be an amazing tool in the classroom and at home, she says. However, “we have to make sure kids recognize it as a tool and not a lifestyle. It’s something that can help them but it’s not something that they need at all times to do everything.”

Miro often guides parents and teachers to teach children in a contextual way as part of her work with Chelsea Miro Educators, a company she started in 2013 to provide one-on-one after-school support for children struggling to learn.

After teaching elementary school, Miro worked for several years on her own as a Learning Specialist. Her company now employs eight Learning Specialists who are pursuing doctorate degrees in education at the University of California, Santa Barbara.

“I find I go back to this type of thinking very frequently,” she says. “When we give kids a context and a world for learning, they are able to engage with it in a very different way than when it’s numbers and letters on a piece of paper,” she says. 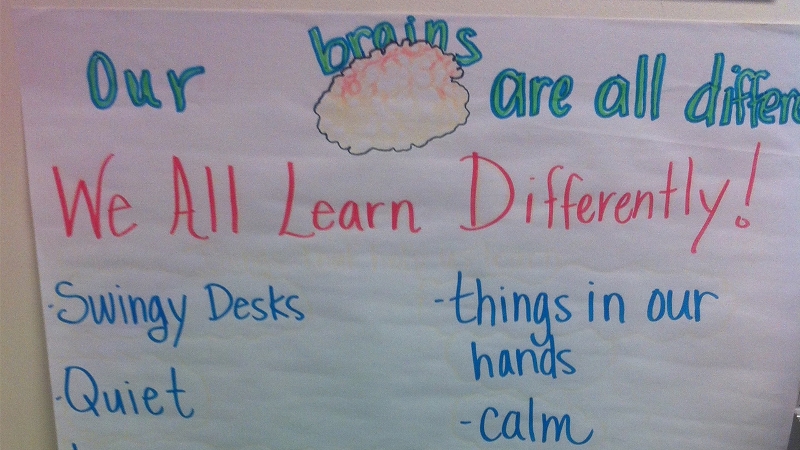 The chart that Miro’s students create in the first days of school about the different tools that help them learn.

The Unbound Classroom speaks to children, parents and teachers in a language they understand. It shows teachers how to bring the real world into the classroom in creative ways, and how to let students’ curiosity be their guide.

“I wanted this book to be very practical,” Miro says. “You don’t have a lot of extra time as a teacher to sift through a whole bunch of pieces that are interesting to think about but don’t have a real-world implication for tomorrow’s class.

As someone who never dreamed of teaching or writing a book on teaching, Miro is excited to share her passion. She hopes to give her infant son, Soren, the opportunity to pursue a creative education where teachers value his curiosity.

“I just want to be his mom,” says Miro, who recently moved to Boston for her husband’s fellowship. “I will be my son’s guide and teacher in many ways, but I can’t be it in all ways. He’s got to learn from other people, too.” 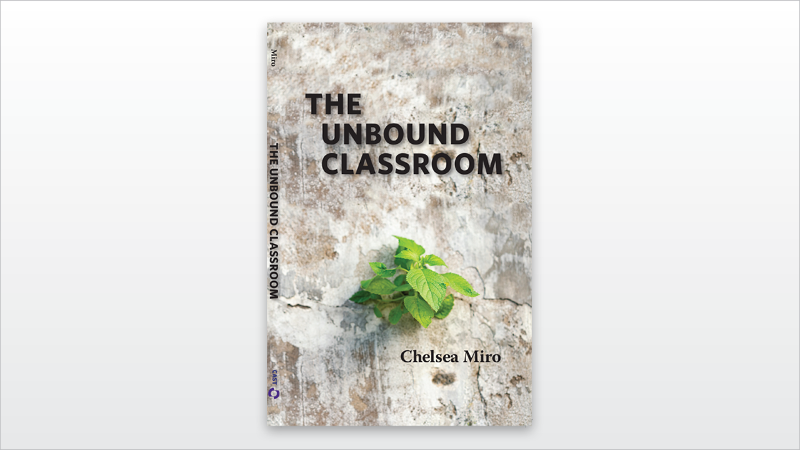 Get The Unbound Classroom